As we enter a new year, our staff looks back at our best reads of 2018. 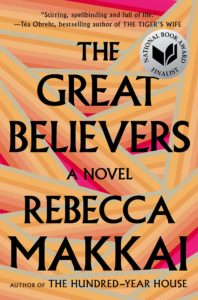 My best read of 2018 was The Great Believers by Rebecca Makkai–by far! I have few memories of the AIDS crisis in the 80s, and this book just tore open this whole period of history that I was old enough to remember but also young enough to be ignorant of. The writing is beautiful and the characters human–so human I felt their losses (which were many), their anger (which was great), and their fear (which was immense). I could hardly stop reading once I started. Closing the pages to go to work, put my daughter to bed, eat breakfast, etc. was sometimes almost impossible to do. 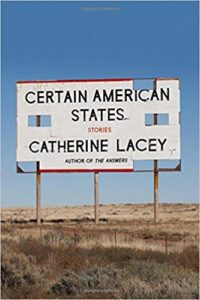 My favorite read from 2018 was Certain American States by Catherine Lacey. This is her third book, a story collection she wrote while working on her manic incantatory debut Nobody is Ever Missing and the air-tightly plotted The Answers. In the tradition of Donald Barthelme and Lydia Davis, these twelve stories are bizarre and brilliant. The stand out for me is probably “Because You Have To,” a sequence of epistolary vignettes addressed to a vanished husband by a young woman barely hanging on. Equally edgy and hilarious is the click-bait-esque “The Four Immeasurables and Twenty New Immeasurables” about the sex lives of twentysomething seekers who are as drawn to enlightenment as they are to going viral. When I wasn’t being dazzled by Lacey’s galloping multi-page sentences, I was dropping the book with laughter. Super weird, scary smart, wholly satisfying. 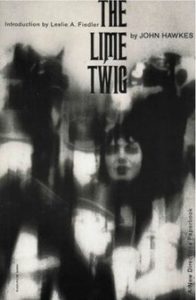 The book I read in 2018 that stands out the most is the one that is most troublesome: compulsively readable in a perverse sort of way–John Hawkes’ The Lime Twig. It’s a novella, published in 1961, that does what novellas are made to do in the sense of steeping you into one single, extended dream that unspools, in this case, fretfully. It’s set in the dank, exhausted atmosphere of post-WWII London and concerns a racehorse scheme into which a foolish, but otherwise blameless enough, lower-middle class couple is lured. The story itself is horribly violent and bleak and not especially leavened by humor, I should say. What one would most read it for would be the style, kind of Virginia Woolf on opium: highly interior, buried so deeply in the consciousness of each POV character (it switches POVs throughout) that all you get are flashes of sensation (i.e., the smell and feel of all the grimy things or small physical comforts that surround the characters) and motif-phrases that represent the ideas that the victim-characters try to hold onto as something true in this world. It’s a work that impresses for its commitment to its own weirdness of style and structure and for the sense of outraged moral vision that faintly threads beneath all the stylistic oddity. 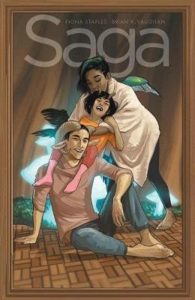 I’ll try to describe Brian K. Vaughan and Fiona Staples’ Saga as Romeo and Juliet set against wars in space and a story about family, but there’s so much more. I first discovered the graphic novel series when my mental illness worsened, and like all good escapism does, I found comfort in exploring a world and meeting characters safely from a distance. It has elements of wonder: robot royals and cats that tell you lied yet cannot help telling you lied. It has elements of suspense: you wonder how the star-crossed lovers will escape when stakes are getting higher and higher because you know they will. It has elements of surprise: characters never seem to meet and then meet each other. Yet, it’s not for the typical reader with its very graphic content and mature rating. My pick might be biased but I have always revisited maybe because its progress represents mine. With Vol.9, one tragic happening kept me awake at night, in disbelief for hours, as I replayed the events, hating yet caring about the character who had caused it all.